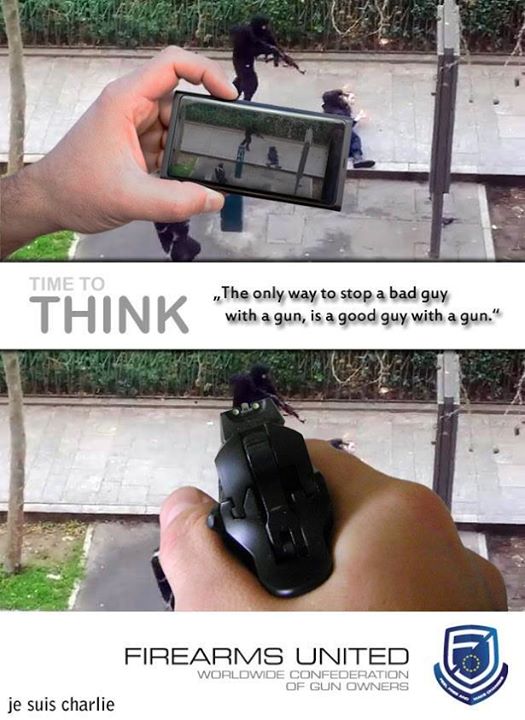 Just over a year ago the entire world discussed the terrorist attack in Nairobi. Amongst many voices one of reason appeared – the voice of Ronald Noble – secretary general of Interpol. He stated that one should expect further attacks targeting so called “soft targets”; places where terrorists know that no resistance can be reasonably expected. Therefore Ronald Noble suggested that states should think over the issue of arming their citizens. Well, it has long been a known fact, that massacres happen mainly in areas where firearms are heavily restricted, so called “gun free zones”. Unfortunately the EU took no notice of his opinion. Perhaps Eurocrats were too busy with proposals made by commissioner Malstrom, which would appear  to give the terrorists and criminals of the world peace of mind in planning their future actions in the future.

Unfortunately Ronald Noble’s words turned out to be prophetic as “Charlie Hebdo” graphic artists found out. As can be seen on the amateur film, terrorists callously shot a police officer, and then, with impunity, they finished him off in cold blood. A question arises would they dare to take such action, if at any time, in any window above them, a law abiding citizen could appear with a firearm?

We are all fully aware, that a civilian armed with a handgun could be no match for a trained terrorist, nevertheless several such civilians could, even one armed citizen would have a chance currently denied to them. If the slightest chance had existed that the Charlie Hebdo journalists had handguns in drawers, they would not have been considered “soft targets” anymore. So, isn’t it the time to begin discussion on introducing an equivalent of the American Second Amendment to the text of the Lisbon Treaty?

Contrary to the popular perception, the Directive of the European Council from 18 June 1991, regulating access to weapons, is a relatively liberal document, leaving a significant space for manoeuvre to the Member States. A majority of restrictions are a result of messing around by local governments. Very often the mythical, read-by-nobody, “EU requirements” are only an excuse to justify introducing unpopular ideas.

A good example came from Poland, where when under the pretence of “adapting the state law to requirements of the EU”, the authorities tried to introduce a ban on using weapons at shooting ranges, by gun collectors. However the Directive itself, although bureaucratic, isn’t so bad.

The Directive is much more liberal than the legislation of many member states. Not only does it provide for a wide range of firearms that require no permit or in some cases – without even a need for registration, but it also envisages comparatively lenient criteria for granting permits – explanation of a reason for firearm possession is the only requirement. It does not provide guidelines what reasons may be considered a justified cause.

It suggests that passing a Police-administered firearms knowledge course with practical exams could be a “justifiable reason”. Another example could be, living in a house or an apartment “just 3 km away from a prison” – as one of Polish government ministers justified his need for a concealed carry weapon – could be one them.

Therefore there are no obstacles, to a total change of gun permit issuing philosophy while staying within the limits the Directive.

In this way, issuance of a firearm permit would be just a matter of verification, whether or not the petitioner did not lose his or her right to possess a firearm.

THE OFFICIAL POSITION OF FIREARMS UNITED IS AS FOLLOWS:

Restrictions should not so overly restrictive that it makes it impossible to realistically apply for and receive a permit, that would be an abuse of the system. Draconian restrictions against everyone is an assumption that everyone is lawless, mentally unstable and willing to create a threat to others. Such assumptions form the foundations of a totalitarian system,
In our opinion minimal criteria should be written into provisions of law, fulfilment of which would guarantee the right to own firearms, so that on the other hand it is clear, who – as defined by law – is a threat to others and thus barred from owning weapons.

In Europe today the coercive approach towards firearm permits is predominant. And in many member states additional harassment is being introduced – due to which even the legal firearms owners remain defenceless.

For example a concealed carry ban, or the requirement to keep firearms in safes. Theoretically it is supposed to ensure safety in the streets. Practically however, as recent events in France have proven, extremists not much are upset by something such trivial as the law. And the situation can become even worse. On the day which followed after the massacre in the editorial office “Charlie Hebdo”, a retaliatory action took place – somebody threw a grenade into the mosque in LeMans.

As these words are written down, it is not yet known, whether or not it is connected with the other shooting in Paris, where a policewoman was killed. One thing is certain – both Christians, and Muslims living in France, are now exposed to attacks by extremists from both sides. The problem in it, that even these Muslims who have nothing in common with extremism can still expect to be attacked. Still we can expect attacks against “soft targets”. We cannot disregard the fact, that due to being disarmed for many long years now, nearly the entire European Union is such a target.

It is worthwhile to note, that according to Art. 5 of the European Human Rights Convention, each of us Europeans, has a right to individual safety. The problem is that we are not getting what was promised. The governments are only giving us the illusion of safety, convincing us, that if we, the honest citizens, give up our weapons, the government will cause the weapons held by bandits to dematerialise. Unfortunately the illusions are gone as soon as a real terrorist steps through the door of the editing office with an exceptionally real Kalashnikov the victims or bystanders have no way to defend themselves or others, but at least they can make a movie with with a smartphone…

Even now Governments across the EU admit that these attacks are impossible to stop and that a police response will not be immediate.

Therefore the aspiration to introduce the European version of the Second Amendment should not be treated, as a “revolution”. We simply deserve our safety. It’s time to end the naive belief that a police officer will appear within minutes of an attack. Let’s stop pretending that if there are no legal firearms, the illegal ones will disappear. The stark reality is simple. If you have got a handgun and a criminal has one, your chances are even. But when the state takes your weapon away from you, a criminal still has his. A criminal thug will not wait patiently for us to contact the police and explain the situation to the duty officer and describe precisely where he is supposed to send the help that is only minutes away. So instead of pretending that the state is able to even come close to guaranteeing our safety, let us demand that our states stop preventing us from protecting ourselves by threating us all as potential criminals.

Even though the most important EU politicians will probably agree with our own view not to blame all Muslims for felonies of the group of extremists, they will happily start harassing millions firearms owners for the actions of individual madmen. Isn’t that a hypocrisy?

Let us remember one thing: cowardice is a common feature of many criminals. It is one thing to attack the journalists in the office, or children on an island, to face armed opposition is something else. It was no accident that Anders Breivik surrendered immediately, as soon as armed police officers arrived on the island of Utoya.

And if politicians disagree with us, we hereby ask them to prove it. Let them give up the real safety which their armed bodyguards are providing, in favour of the delusion they want us to live in.

Let them show that they are not afraid by coming out to live with us in what Ronald Noble described as the “soft zone”.

A LITTLE MESSAGE TO THE ANTI-GUN CROWD:

Recently, upon posting this picture, Firearms United has been accused by some anti-gunners who commented on our page of “exploiting the death of the Paris attack victims to push its agenda.” Well, let’s clarify a few things.

YOU (the anti-gun lobby) exploited the deaths of the Montreal’s Ècole Polytechnique students to disarm canadians;

YOU (the anti-gun lobby) exploited the deaths of the victims of Martin Bryant in Port Arthur to disarm Australians;

YOU (the anti-gun lobby) exploited the deaths of the victims of Michael Ryan in Hungerford and of the little children slaughtered by Thomas Hamilton in Dunblane to disarm the British;

YOU (the anti-gun lobby) tried to exploit the deaths of the Stockton schoolchildren, and of the Columbine High School and Virginia-Tech students, and of the Aurora moviegoers and of the Sandy Hook school pupils to try and disarm Americans.

WE (the pro-freedom lobby) are trying to point out the fact that your recipes are leading the world to the verge of disaster, leaving millions of innocent and honest citizens worldwide defenseless against a heavily armed wave of new criminals (emboldened by the knowledge that their victims can’t fight back) and against the growing threat of global terrorism.

YOU (the anti-gun lobby) used the blood of the dead to paint monster masks on the faces of law-abiding gun owners and supporters of gun rights in order to hide away the utter failure of your anti-self-defense and anti-individual rights agenda.

So, dear gun grabbers, forgive us, but we respectfully REFUSE TO ACCEPT LESSONS IN MORALITY FROM YOU regarding “respect” for the victims of tragedies!